Borrowers will resume payments on federal student loans on Feb. 1, nearly two years after repayments were deferred due to the pandemic. The vast majority of borrowers say they won’t be ready to pay.

Borrowers are less than three months away from having to resume making payments on their student loans, and although loan servicers are well into the process of executing the Department of Education’s transition plan, a huge majority of borrowers say they aren’t financially prepared for repayment to begin.

The department announced in August that it would be extending the student loan repayment pause—which has been in effect since March 2020 due to the COVID-19 pandemic—for the fourth and final time until Jan. 31, 2022. After that date, loan payments will resume, interest will begin to accrue again and collections on defaulted loans will restart.

The task at hand for the department and federally contracted loan servicers is unprecedented—the student loan system has never been switched on for tens of millions of borrowers all at once. At the same time, millions of borrowers will be making payments to a different servicer than they were assigned prior to the pandemic, given that three servicers have decided to end their contracts with the department next month.

“The real challenge for the servicing ecosystem is that it was designed and constructed to handle a steady state of borrowers who are coming in and out of repayment—but not 30 million of them all at once,” said Scott Buchanan, executive director of the Student Loan Servicing Alliance, which represents loan servicers. “From a resource perspective, from a system perspective and from a staffing perspective, this is going to put a lot of strain on the system. There’s no amount of money that the Department of Education could spend that would deal with all of the pressures that we’re going to have.”

According to Buchanan, servicers have received guidance from the department about how it wants the resumption to occur and are currently focused on making updates and changes to their operating systems. They’re also working on targeted communications plans so that borrowers know when to expect their billing statements, how to confirm if they have automatic debit set up and whom they can call if they have questions. Some of those communications—which are expected to begin in earnest next month—will be focused on at-risk groups of borrowers: those who graduated during the pandemic and have never been in repayment, as well as those who were delinquent on their loans before the repayment pause began.

The lack of communication from the department and servicers about the process for resuming loan payments was one of the primary reasons that advocates were calling for a fourth extension of the pause earlier this fall. So far, that communication with borrowers looks much different than it did a few months ago. A survey of nearly 34,000 student loan borrowers conducted by the Student Debt Crisis Center this month found that 57 percent of respondents received notification from their loan servicer that payments were resuming, and 33 percent heard the news directly from the department. In June, only 30 percent and 22 percent had heard from their servicer or the department, respectively. 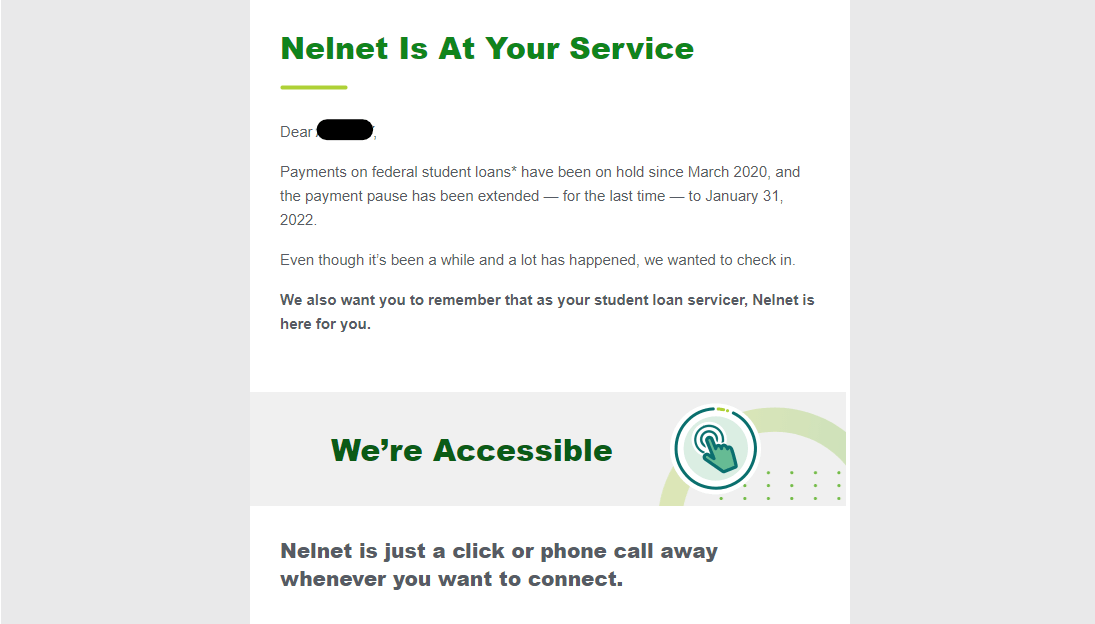 Although more borrowers are aware that payments are resuming, that doesn’t mean they’re ready for it. In the same survey by SDCC, 89 percent of fully-employed student loan borrowers said they aren’t financially secure enough to begin making their loan payments again, noting that the added expense will prevent them from affording other bills like rent, car loans and medicine. Over a quarter of respondents said that one-third or more of their income will go toward their loan payments, and one in 10 said loan payments would eat up half of their income.

“Borrowers are stressed about going back into repayment at just the black-and-white level of, ‘How am I going to afford this?’” said Cody Hounanian, executive director at SDCC. “That’s where the Department of Education and student loan servicers have to come in and provide the proper guidance.”

Even though the department has sent emails to borrowers about payments resuming and shared guidance with loan servicers about what the process will look like, that same information hasn’t been shared with the public. That needs to be clearer as the resumption draws closer, said Abby Shafroth, a staff attorney at the National Consumer Law Center.

“We would like to be hearing more from the department about how they are going about making sure that the servicers that they contract with are ready and prepared to take on this challenge,” Shafroth said. “Are the servicers going to be adequately staffed and trained so that borrowers don’t have to wait hours on the phone to get through to someone? We don’t really have any assurance of that so far, and we need to so we can be confident that this is going to go decently for borrowers.”

Buchanan said long call hold times is one of his concerns about the restart, but it’s an easily solvable problem if borrowers are proactive and don’t wait until Feb. 1 or 2 to call their servicer with questions.

“It’s sort of like holiday shopping,” Buchanan said. “Don’t wait until the Feb. 1 rush. Call us today and talk to us now. We have staff that can handle every call that comes in today. We can look at borrowers’ accounts, see what repayment plan they’re in, tell them what their options are—if there’s a different repayment plan that might fit them or they lost income, we can get them into the right repayment plan—and we can do that today so that when we get to Feb. 1, they’re set and ready to go.”

Because this has never been done before, Buchanan is confident there will be hiccups along the way. But he said the guidance from the department has been helpful, and servicers will know by late December whether everything has been implemented properly—leaving plenty of time ahead of the restart.

Still, advocates are pushing for a fifth extension of the pause, arguing that the student loan repayment system needs to be permanently fixed before payments begin again. That includes regulatory changes to the Public Service Loan Forgiveness program and income-driven repayment plans, both of which are currently under discussion in the department’s negotiated rule-making process.

Both SDCC and NCLC are calling for President Biden to fulfill a campaign promise he made to administratively cancel student debt—and to do it before loan payments resume. But Biden has said he’s waiting for a memo from the Departments of Education and Justice examining his authority to cancel debt before he takes action, though a highly redacted Freedom of Information Act request has shown that a draft of the memo already exists.

“We really need to think diligently about what it means to start payments and if we’re better off just extending this deadline and canceling student loan debt,” Hounanian said. “The system is quite broken and in need of serious repair.”